Skip to content
In Macon, Georgia, from the 1890s to the 1930s, Leo Moss was an early American black doll maker. He was a Black handyman who made dolls out of papier-maché derived from wallpaper scraps and painted faces with soot from stoves and chimneys. His wife helped by making the doll clothes. Moss also made dolls with the look of a child crying with actual tears. Every single doll was unique, created in the images of family and friends. It eventually became a desire for many doll collectors to own Moss dolls, as his dolls did not become recognized until the early 1970s, several years after his death. His dolls gained national exposure after one of the Moss dolls was entered in the 1973 United Federation of Doll Clubs 24th Annual Exhibit at Louisville, Kentucky. In today’s market, with or without tears, Leo Moss dolls command thousands of dollars placing them beyond the grasp of many collectors.

From September 20, 2016, through June 25, 2017, The Charles H. Wright Museum of African American History, in Detroit, Michigan, exhibited one of the largest collection of black dolls, “I See Me: Reflections in Black Dolls”. It featured a large number of black dolls, starting from the 19th century and up to our time. It included dolls that came from the museum’s own collection as well as dolls from private collectors and others. Jennifer Evans, the assistant curator at the Wright Museum, states, “The purpose really was to show how dolls empowered African Americans throughout history as a way to see yourself, to empower yourself,” “Having so many dolls in one place, and for those growing up who couldn’t have a black doll, is very powerful. ”The exhibition contained the largest number of Leo Moss dolls ever displayed.

I See Me: Reflections in Black Dolls, traces the history of black dolls, from porcelain to collectibles and plastic toys. next to the 16 Leo Moss dolls were 138 others, including antiques, black Barbie and even some celebrity dolls – created in the image of Serena Williams and the Obamas at the inauguration.

“The existence of black people and how they have been perceived by others is evident by dolls that represent them.” States Garrett, as he also states, “ These include dolls handmade by slaves, dolls that were unfair representations of black people made by non-black people, and dolls made by doll makers such as Leo Moss and Beatrice Wright, who both focused on creating dolls with ethnically correct features.”

The 20th century saw a revolution in the making of black dolls when American manufacturers began making the first commercial rag and black plastic dolls. In the 1950s, a black businessman, such as Beatrice Wright Bravington, founded the B-Right toy company, and black dolls entered the global market.

Another early Black Doll company, owned by African Americans and operated by Shindana Toys, was founded in 1968 in Los Angeles.

Louis Smith, the company’s president, once said in an interview that self-love was an important part of creating black dolls. “We believe that only by learning to love oneself can one learn to love others.”
Celebrity dolls on the show included Barack and Michelle Obama, inauguration dolls with their tuxedo and gown.

There was a Misty Copeland, ballerina doll and the tennis player, Serena Williams, doll . Another doll is modeled after Bessie Coleman, the first African American female pilot, who was wearing goggles and a leather jacket.

The exhibition also featured a selection Barbie dolls, including a plus-size black doll.
The black doll exhibition offers insight on how black children see themselves, and on how they bring their own self-confidence into everyday life. “Black dolls have been created in the likeness of past and present historical figures which have played an important role in society,” said Garrett.

Black dolls allow an opportunity to teach and explain things to our Black children, like having pride in themselves, their family and in their community. Black dolls provide children of color with a reflection of themselves so that they can be proud of who they are. It’s been stated, that one of the reasons Black dolls are important for children of color is that, “Character dolls preserve a moment in history.” Little Black girls can be left feeling confused and insecure if they see that most of the dolls in the toy stores don’t look like them. There are Black dolls that have been designed to teach your little girl how to love their hair’s natural curl and texture.

A Black doll isn’t just about skin color for our little girls to relate to, but it is also about cultural differences. Black children should see themselves on the covers and in the pages of magazines to empower them toward a successful future.

Black dolls provide our children with a way to celebrate their heritage and the beauty of their blackness. It teaches them that it’s okay to love themselves and that they are beautiful inside and out.
Playing with Black dolls also helps a child to be happy with themselves and increases their self confidence. A Black doll can be a child’s first best friend and a reflection of themselves. All children can play with black dolls as a way to encourage diversity. Black children can use their imagination and create stories that include dolls of every color to further encourage diversity. When black children get attached to their black dolls, it makes them proud of who they are.

Toys create emotional connections with children. When children associate their playtime with a toy, like a Black doll, they are feeling a positive connection.
When children play with black dolls, they will learn that we come in all different colors and shades. Brains and Beauty Dolls has a collection of dolls that represent different shades of our blackness and culture.

Where Can I Buy Black Dolls

Fortunately, today’s kids don’t have to go too far to find dolls that look more like them. Black dolls are becoming easier to find.

Black dolls can create the perfect starting point to initiate a conversation with your children about diversity and being proud of who they are.

Meet this beauty. Her name is Malia. She is a black, 18 inch doll with beautiful brown eyes and long, curly human hair.

Malia has a moveable head and limbs made of smooth vinyl. The middle half of her body is made of cloth. She also speaks 20 words of empowerment. 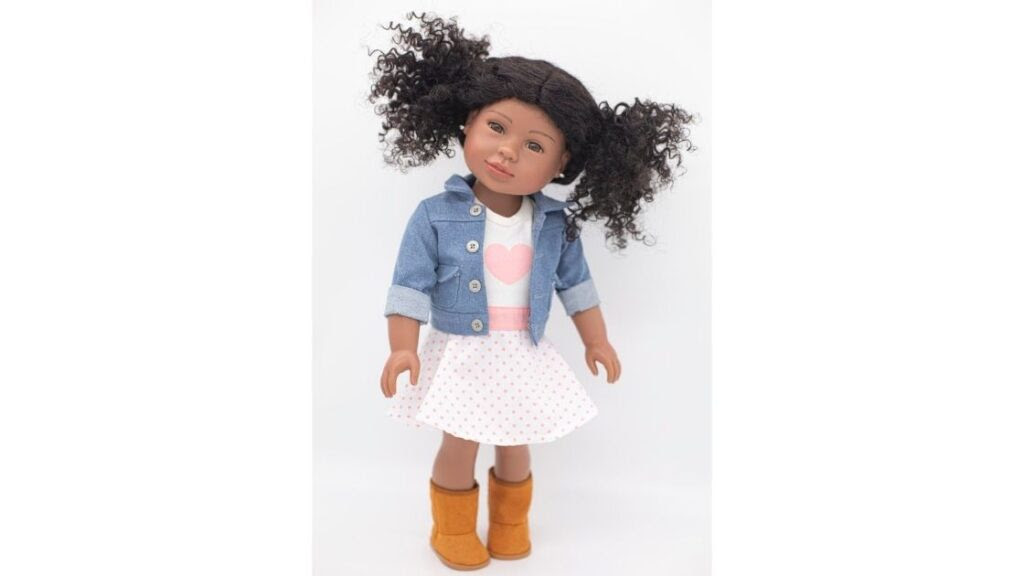 A white dress with pink polka dots and a pink heart

A pair of earrings